The article presents the mechanism of formation of the pad cratering defect leading to detachment, explains the differences between pad cratering and delamination, and presents methods of preventing this unfavorable phenomenon.

The pad cratering phenomenon is defined as damage to the laminate that occurs under the pads prepared for SMD components, causing the pad to detach from the laminate. Typically, the source of the fracture is a dynamic mechanical event. Under the influence of external stresses, the initial fracture propagates further in the laminate, often also involving the conductive paths, with the consequent opening of the electrical circuit. The term pad cratering, which could literally be translated as 'crater formation', came from the fact that in the event of very extensive fractures, the pad may even detach completely from the PCB, leaving a 'crater' behind. 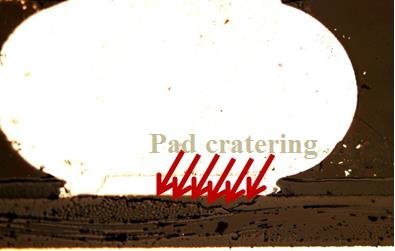 While this is generally not a common problem, it can be concluded that pad cratering is more common in lead-free than lead-free, mainly due to the use of different laminates. In contrast, the approach to avoiding this phenomenon is either to reduce the stresses in the laminate itself or to use a stronger and more resistant material.

Several methods are used to reduce stresses inside the laminate, including increasing the effective size of the pad by using pads defined in the solder mask, using glue at component corners, and imposing strict limits on PCB bending during the PCB assembly process (e.g. during ICT testing). However, the basic approach to avoiding these defects is the use of laminates with increased resistance to pad cratering. Increasing the strength and resistance to this effect of the laminate material itself has proved difficult, and very little progress has been made in this regard for the most popular lead-free epoxy resin laminates. Due to the higher internal strength, polyimide has a higher pad cratering resistance than epoxy laminates. However, compared to the widely used epoxy laminates, polyimide is more expensive and more difficult to process. As a compromise, polyimide is only used as the outer layer of more complex stack-ups: compared to using only epoxy laminates, the hybrid structure formed by the use of epoxy laminate as inner layers and polyimide as surface layers improves the board's crater resistance.

Delamination is not pad cratering

Due to the higher flow temperature required for the assembly process using lead-free solders, many of the laminates used for years in lead assembly would have a permanent problem with delamination if used for lead-free assembly. Typically, delamination occurs in the internal layers, less frequently in the external ones, and its primary cause is the uneven distribution of stresses between the layers during the assembly process. The authors of the article 'Novel Approaches for Minimizing Pad Cratering' examined the delamination distribution in a 20-layer PCB - they tested 153 samples from 32 different laminates. It was found that most of the delamination occurred in the layers close to the center of the stacks, and no cases of delamination were observed in the outer layers. Due to the high tendency to delaminate the internal layers under lead-free assembly conditions, in recent years laminates with increased heat resistance, better suited to the lead-free process, have been developed. Unfortunately, the new generation of laminates is also more brittle than the laminates dedicated to the lead process, which has translated into an increase in the occurrence of pad cratering.

Contrary to the delamination in the inner layers, pad cratering occurs only on the surface layers (this difference is illustrated in Figure 1). 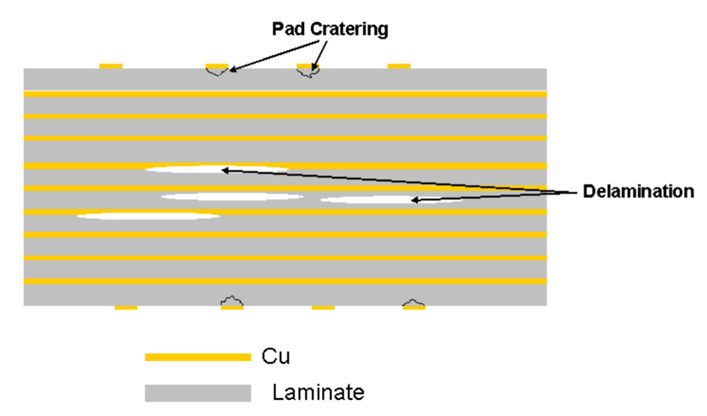 What is the purpose of washing PCBs? What are the PCB cleaning methods?

PCB cleaning is a post-soldering process. Its purpose is to remove flux residues and other impurities created during the PCB assembly and production process, which could be responsible for the malfunction of ...
Read more