Vacuum brazing is the best way to reduce voids.

The article is a summary of a wider study on the effect of the application of the vacuum stage on the reduction of the number and / or area of voids.

In the case of PCB soldering processes, the purpose of the application of vacuum is primarily to remove volatile substances from the solder joints and the associated reduction of voids. The application of these processes is based on increasingly stringent requirements for the quality and reliability of electronic products, as well as higher current densities (e.g. in power modules) and higher power losses resulting from the presence of voids.

Voids are gas bubbles that arise as a result of degassing, for example, flux residues or by-products of various chemical reactions. Experience gained in recent years has shown that a pressure of less than 50 mbar applied in the vicinity of molten solder is sufficient to significantly reduce the number of voids.

The figure below shows high brightness LED solder joints after soldering without applying a vacuum (top). The comparison of the two images clearly shows that at a negative pressure of 10 mbar, the number of voids and their area were drastically minimized. For large-area soldered joints, such as LEDs, QFNs, and Si chips, fewer voids result in improved thermal performance as well as a reduced tendency for the component to tilt. 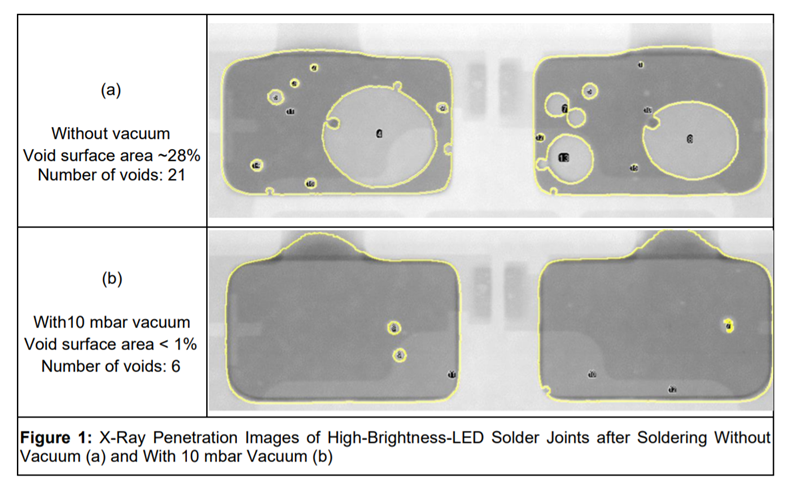 The contradictory interactions of various important factors in the brazing process are one of the key reasons why optimization of processes and materials used to reduce void formation results in only partial or local improvement (e.g. only one type of component is improved). For example, as the authors of the discussed article point out, the improvement in wetting by applying an immersion tin surface finish increases the number of voids in the case of BGA, while reducing them in the case of QFN. These two types of solder joints differ in particular in the geometry and the surface-to-volume ratio before and after soldering.

The research results obtained so far lead to the fundamental conclusion that the mechanisms of void formation depend on many factors and that a permanent reduction of voids can only be achieved by introducing a vacuum into the process.

In addition to the main goal of reducing voids, the use of a vacuum also offers other benefits that depend on the technology of the system used. The following list describes the characteristics of three different soldering processes - contact, gas phase (i.e. condensation soldering, Galden vapor) and convection (i.e. reflow) - and will be the effects of introducing a vacuum into them.

Comprehensive PCB assembly service - one or many subcontractors? Automotive-grade electrical connectors: invisible but critical to the operation of the car.
Read more

What are the key factors influencing solder paste viscosity? Will finer metal balls in the paste increase its viscosity or vice versa?
Read more
This site uses cookies!