Toshiba Electronic Devices & Storage Corporation has developed a new SiC MOSFET structure that simultaneously provides higher reliability at high temperatures and lower power losses. In the case of the 3.300V system at 175 ° C, which is more than twice the intensity of the previously used Toshiba structures, the new design works without loss of reliability. The specific switching resistance at room temperature also decreased by about 20% for the 3,300V systems and 40% for the 1,200V systems.

Silicon Carbide (SiC) is widely viewed as a next-generation material for power circuits because it provides higher voltages and lower losses than silicon. While SiC power devices are currently mainly used in specific solutions (e.g. inverter in trains), they will soon find wider use, including photovoltaic power systems and energy management systems for industrial devices. However, the spread and development of the SiC system market is hampered by problems with their reliability. One problem is the spreading of crystal defects as the current flows through the PN diode located between the power source of the MOSFET and the drain, which increases the switch-on resistance and lowers the reliability of the device.

Toshiba has developed an innovative chip structure, the MOSFET with an integrated Schottky barrier diode (SBD), which is an important step towards solving this problem. The innovation was presented at the international conference on power semiconductors PCIM Europe 2020 and introduced to the company's products in August 2020. This structure prevents the PN diode from operating by placing the SBD parallel to the PN diode in the MOSFET; the built-in SBD has a lower switch-on voltage than the PN diode and current flows through it, suppressing the switch-on resistance changes.

The new design is a modification of the MOSFET with built-in SBD, achieved through process changes and optimized design to enhance SBD current attenuation in the PN diode. This resulted in a 3.300V chip structure with more than twice the current density at 175 ℃ compared to the previous generation of Toshiba structures without sacrificing reliability. The structure also reduces the resistivity by about 20% in the 3.300V chip and about 40% in the 1.200V chip at room temperature. 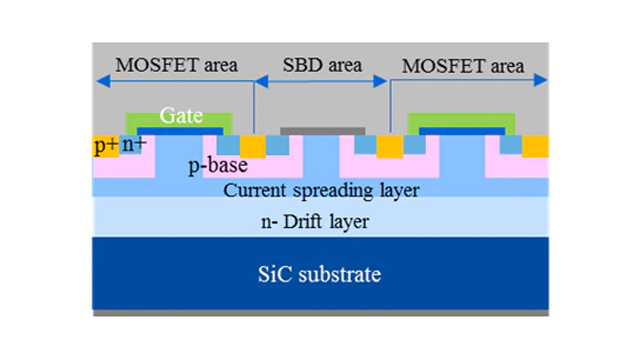 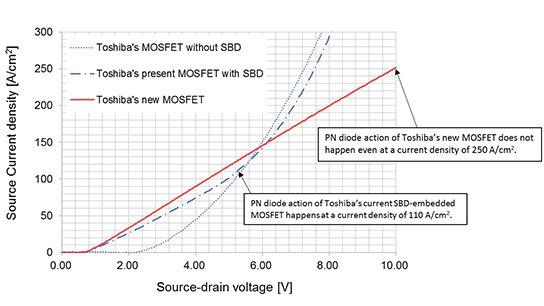 Details of the achievement were reported at PCIM Europe 2021 and at the IEEE-sponsored International Power Semiconductor Devices and ICs 2021 Symposium (ISPSD 2021) held online.

Toshiba began shipping samples of the 3.3 kV SiC Class Power Module with the new structure in May 2021. If you are starting to read this article, you are probably interested in the topic of broadly understood energy storage. Maybe you already ...
Read more How much thermally conductive material do you need? And what is the pattern for applying the material to the substrate?
Read more Laboratory measurements made by Fraunhofer ISE confirmed that Saule Technologies perovskite photovoltaic cells are able to work with an efficiency of 25.5% in operating conditions typical for IoT applications.
Read more
This site uses cookies!