Are there IPC guidelines for the attachment of PTH unions that are assembled with mechanical components? Should they be tightened before or after soldering?

According to the majority of specialists speaking on this subject, there is a belief that connectors should be tightened before soldering. For example, Kris Robertson of IPC writes: 'There are no IPC guidelines that state that tightening should be done before or after soldering. Even the amount of torque to be used for fastening is completely dependent on the individual design. However, there are requirements that the soldered connector should not be stressed during or after soldering. If the system is soldered first and the component is then tightened, the soldered connectors will be subjected to torque-dependent loads.'

Similarly, says Rodney Miller of Specialty Coating Systems: 'PTH connectors should be tightened prior to the reflow process. If this is done later, additional stresses may arise in the system, reducing the durability of the PCB. Moving on, if you are using the paste-in-hole technique and run the circuit through wave soldering, there is actually no choice: of course, you have to screw the connector first.' Rodna also gives an example from her own practice: when assembling power components containing a mechanical heat sink or a bus, TO-220, and TO-525 packages were tightened to the mechanical components in the same way as the PCB laminate connectors. According to the requirements of the client from the military sector, during the assembly of such a system, it was also required to slightly unscrew the mechanically attached component after the reflow process to reduce the voltage on the PCB.

Terry Jeglum, CEO of Electronic Technology Corporation shares a similar opinion: connectors should always be mounted before soldering. In addition, he also points out that if it is a long connector and it is on the edge of the PCB, mounting it will help keep the board rigid during assembly. However, the most important argument for tightening the connector first is that tightening them later may damage the solder connectors: mechanical force will overstress the connectors, which can easily lead to failure.

Leo Lambert, vice president and technical director of EPTAC Corporation is also sticking to standards. The IPC-A-610 standard in section 7.1.8 indicates that when mounting PTH connectors on a PCB, the mechanical components are fully inserted and, where applicable, snapped onto the board. Of course, this also applies to components such as bolts or nuts. Again, the reason for assembling the mechanical components of the connectors prior to soldering is to prevent mechanical forces from being applied to the soldered connectors which is the case when anything is mounted after the soldering process. Leo Lambert also writes about SMT connectors: 'When it comes to surface mount connectors, many of them have to position pins, but I couldn't find any that would require a mechanical tightening to the PCB. Their strength depends on the configuration of the terminals and the proximity of the connector housing to the PCB. […] However, if there are surface mount connectors that need to be tightened, I imagine it would have to be inserted and soldered by hand. Tightening a surface mount element in solder paste is definitely not good manufacturing practice. ' 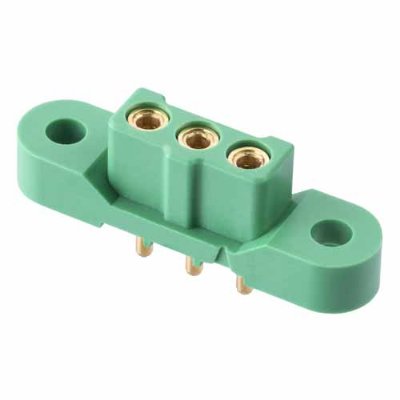 SystemPlus analysts took a closer look at the innovative illumination of the latest iPad Pro, based on the many promising miniLED technology.
Read more

What information do ICT tests provide us with? ICT (In-circuit Test) is one of the methods for testing an assembled PCB. This is a very important process that allows you to get a guarantee of a system that operates...
Read more

Squeegee pressure in the printing process A simple and understandable application note, developed by AIM, indicates selected problems related to the pressing force of the squeegees.
Read more In distributed power systems where multiple DC converters are used, the challenge for designers is to keep these components as small as possible to save space on the board.
Read more
This site uses cookies!