In our modern world, we are surrounded by electronic and electrical devices, and wireless communication is becoming more and more ubiquitous. Mitigating the effects of electromagnetic interference (EMI) is therefore essential.

When designing electronic systems, engineers must tackle the problem of electromagnetic disturbance. There are two key reasons for this:

Although engineers often see electromagnetic compatibility (EMC) as a complex task, if the product development process is followed correctly, this challenge can become very simple.

EMC is derived from several basic principles of electrical engineering, so it is a relatively easy to understand problem. These rules are:

Sensitive electronic circuits can be prevented from picking up EMI from external sources by placing them in a metal housing (the Faraday cage covers everything inside it, as long as the spacing between components is significantly less than the radiation wavelength). It is very important that this is done correctly, otherwise the metal housing itself will become the antenna. The housing must be properly wired to the same ground as the PCB via low impedance tracks. Metal elements (e.g. vertical posts) in the housing structure, to which the board is screwed to, should be taken into account, as well as the grounding holes on the PCB.

While the use of an enclosure that functions as a Faraday cage prevents EMI, it is not an entirely practical method due to the relatively high cost. A more economical method is to use spring contacts, such as those offered by Harwin. These surface mount components can be placed on the edge of the circuit board with pick-and-place machines. After sliding the plates into place, they ensure effective grounding, without the need for costly changes to the assembly process. 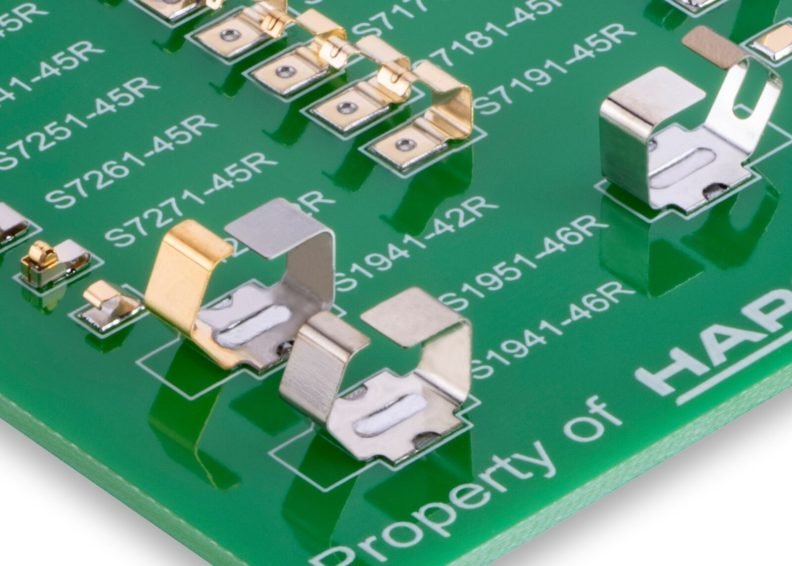 When the electronic system is shielded against external EMI disturbances and does not emit EMI itself, then what is happening at the level of the system itself, because there is always the risk of individual components or devices in the system interfering with each other. The close proximity of analog / mixed signal, RF and digital circuits can cause noise coupling. EMI produced by a component that has capacitive or inductive properties can affect the signal passing through neighboring devices.

The noise coupling can be distributed through the PCB paths or in the air via radiation. Radiated noise coupling can be resolved by placing metal shields (also known as shielding cans) over certain circuits or selected areas of the circuit. THT leaded cans are readily available in standard shapes and sizes or are custom made to individual requirements. After finding the right box, design a PCB with appropriate mounting holes, electrically connected to the ground plane.

The use of a shielding box increases the complexity of the assembly process. If all other devices on the PCB are surface mounted, soldering the through hole lead can requires a separate process (wave or hand soldering), and each additional operation adds cost. In addition, it must be remembered that, as indicated earlier, each metal element can become an antenna, and thus also the THT pins of the can can become an antenna.

Use of surface mount clips

Harwin has developed a range of surface mount clips designed to hold the metal can shield on to the PCB. Since this combination has no metal leads, there is no risk of accidentally forming the antenna. Thanks to the clips, an additional step in the assembly process is also avoided.

There are many models of clips in a variety of sizes and shapes as well as different levels of retention strength. If the metal can needs to be removed regularly to access the circuits inside, it would be best to choose clamps with less force. For systems that may be exposed to more extreme conditions, including severe shock and vibration forces, a higher level of retention is recommended.

Source: Understanding EMC Inside and Out, © Harwin & https://tek.info.pl/ 5G is basically not another technology, but only a 4G modernization, so also modernizing modems to adapt to future network standards should not be too difficult or expensive.
Read more The formation of solder bridges is one of the most common defects - the article presents eight of the most important causes of this phenomenon.
Read more

Mechanism of tin mustache formation and methods of prevention

What exactly is the reason why whiskers are formed on the tin layers applied to the copper substrate? Also read what can prevent their formation.
Read more