Due to the enormous growth of broadband communication and data services, there is a growing demand for fiber optics communication connectors such as Subscriber Connector (SC) and Lucent Connector (LC).

What defines a good fiber optic connector and what is the most important in its selection? A detailed description of SC and LC connectors and their comparison will show how the fiber splicing evolves with the advancement of new technologies and the development of applications such as data centers and 5G base stations. At this point, it is worth mentioning that there are several types of fiber optic connectors, and each of them has emerged as a solution for a specific product and, as such, has a certain set of technological limitations.

SC and LC fiber optic connectors have become the most common components in a wide range of connectors available on the market, supporting LAN, SAN, WAN networks, data centers, telecommunication centers, cellular base stations, CATV networks, optical fibers x (FTTX) networks and test and measurement systems. This is mainly because both SC and LC connectors are durable and reasonably priced. They also enable the creation of reliable connections, precisely aligned and very smooth in terms of optics.

The remainder of this article provides a detailed overview of these two most popular fiber interfaces and their key design attributes, such as interface attenuation, alignment accuracy, repeatability, field connectivity, etc. This article also delves into what new features can be found in their anatomy and which one is likely to be the winner in the long run.

The SC Connector, which stands for Subscriber Connector, is also referred to as Square Connector or Standard Connector. It owes its popularity to its low price, durability and simple installation, both for point-to-point optical networks and passive networks.

The SC is a push-pull connector that uses a ceramic ferrule to ensure very accurate alignment of both parts of the connector. It is square-shaped and is also known as 'stick and click', which also forms the acronym SC. It is also equipped with a locking catch that allows the connection and disconnection operation (Figure 1).

SC connectors are considered to be perfectly suited for applications that require high precision signals and are sensitive to return loss. Examples are FTTX networks and RF video delivery.

The new SC connectors further simplify installation, maximize performance and offer guaranteed insertion and return loss suppression equivalent to factory-made connectors. However, the SC has a large housing and a 2.5mm sleeve, which makes it less suitable for densely packed cabinets or panels. 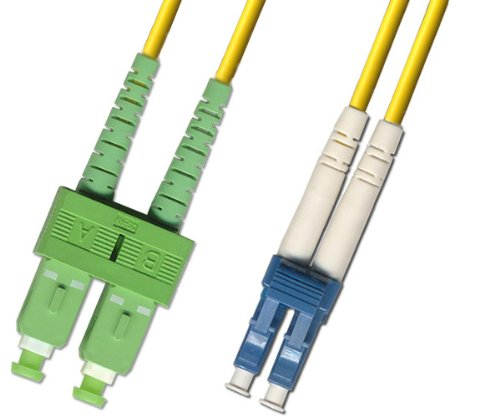 Figure 1: The main difference between LC and SC fiber optic connectors is the size and type of mechanical connection. The SC is a push-pull connector while the LC uses a latch as opposed to the SC locking tab.

This not-so-compact design, a key factor in building networks, has led to the development of a younger and smaller cousin to the SC, the LC, also known as Little Connector.

Lucent Technologies, a company now part of Nokia, developed LC connectors in the early 2000s as a response to customer complaints that ST and SC connectors were too large and too easy to disconnect from optical fibers. However, the initial market reaction to LC connectors was not very warm, mainly due to the high license fee.

Eventually, with the increasing availability of LC compatible transceivers and other active network components, a smaller version of SC connectors began to spread to new applications such as fiber optic to the end-user (FTTH). The smaller size, with a 1.25mm diameter sleeve, was also a huge advantage in high-density applications such as data centers and telecommunications communication centers.

The LC is also a push-pull connector, but unlike the SC locking tab, the new design uses a latch located on a smaller sleeve, making it extremely popular in data transmission applications.

The low-profile push-pull housing in SC connectors maximizes the packing density of the panels, and the latch directly placed on the push-pull housing ensures efficient insertion and removal. Moreover, the ability to group the LC connector into larger assemblies, like RJ45 connectors, has become a major factor in its popularity.

Some LC connector manufacturers claim that they do not use resins or polishing, which makes them faster than conventional epoxy leads. These types of LC connectors facilitate quick repair and monetization of cable in tight spaces and are now used in systems with high data rates such as Ethernet from 1 Gbit / s to 10 Gbit / s and in FTTD networks.

Some other types of connectors allow for hardening and preassembly of LC connector ferrules prior to polishing, improving their throughput and eliminating accidental fiber breaks. The new designs also feature a simultaneous rotation of both ferrules to ensure that the fibers are not exposed at any point when changing polarity.

Comparison of SC and LC connectors

To begin with, both SC and LC connectors offer almost the same level of insertion loss and return loss, which are the two basic parameters of fiber optic connectors, as well as copper cable connectors.

In addition, most SC and LC connectors conform to the TIA / EIA 568B.3 standard, which specifies a maximum insertion loss of 0.75dB for both single-mode and multimode fiber links. Similarly, the minimum return loss is ≥26 dB for single-mode fiber and ≥20 dB for multimode fiber.

What is most noticeable when comparing SC and LC connectors (Figure 1) is that LC connectors have a 50 percent smaller footprint due to the compact connector sleeve and housing. This is crucial as connection density is becoming the main selection criterion in next-generation IT applications such as data centers.

As for the cost comparison, SC connectors can be produced at a lower cost and therefore cost less than LC connectors. However, LC connectors are expected to dominate this market segment, mainly due to the density advantage, and economies of scale could ultimately reduce the cost difference between SC and LC devices. Apertures for the thermal pad of the QFN component. Long ago, IPC published the IPC-7093 Implementation of the Design and Assembly Process for Bottom Leaded Components, from which some basic recommendations can be drawn regarding the shape of apertures under QFN.
Read more

Fairphone 3 is a smartphone with a mission: the company focuses on fair trade conditions, long device life and ease of repair. See how such a smartphone is built.
Read more Automotive-grade electrical connectors: invisible but critical to the operation of the car.
Read more
This site uses cookies!