Design of SiC MOSFET transistors to improve the efficiency of traction converters in electric vehicles.

An efficient traction converter is key to compromising a car's performance and range, and one of the key ways to improve efficiency is through the use of silicon carbide semiconductor devices with wide bandwidth (WBG).

Engineers have to compromise the performance and range of modern electric vehicles. Faster acceleration and higher cruising speeds require more frequent and time-consuming recharging stops. A greater range, in turn, is possible at the expense of less dynamic driving. To increase range and offer drivers greater performance, engineers must design drivelines that ensure that as much energy as possible is transferred from the batteries to the driven wheels. Equally important is the need to keep the drivetrain small enough to fit inside the vehicle. These dual needs require components with both high efficiency and high energy density.

A key component in an electric vehicle's powertrain system is a three-phase voltage source converter (or "traction converter"), which converts the DC voltage from the batteries into the AC voltage required by the vehicle's engine or electric motors. Building an efficient traction converter is key to finding a trade-off between performance and range, and one of the key avenues to improve efficiency is the proper use of silicon carbide (SiC) wide band gap semiconductor (WBG) devices.

This article describes the role of a traction converter in an electric vehicle. It then explains how the use of SiC metal semiconductor field effect transistors (MOSFETs) can provide a more efficient electric vehicle drive system than insulated gate bipolar transistors (IGBTs). The article ends with an example of a traction converter based on SiC MOSFET transistors and design guidelines to maximize the efficiency of the device.

What is a traction converter? 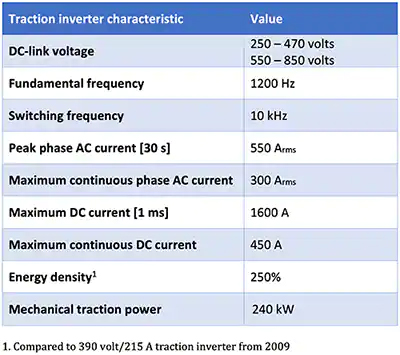 The traction drive typically consists of three half-bridge elements (high and low side switches), one for each motor phase, with gate drivers controlling the switching of each transistor on the low side. The entire assembly must be galvanically isolated from the low voltage (LV) circuits that power the other vehicle systems (figure 1). 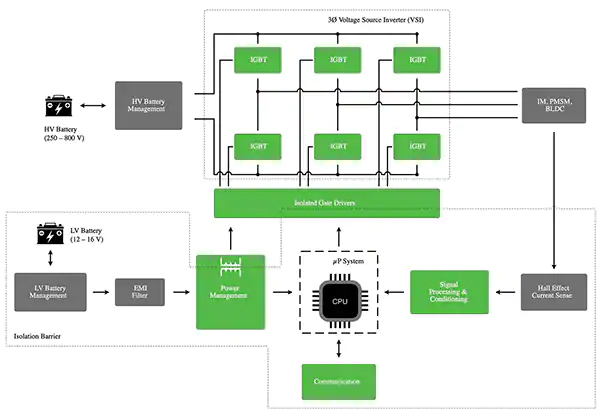 Figure 1: The electric vehicle requires a three-phase voltage source inverter (traction converter) to convert the DC current from the high voltage battery to the AC current required by the vehicle's motor or electric motors. The high voltage (HV) system, including the traction converter, is isolated from the vehicle's conventional 12V wiring. (Image credit: ON Semiconductor)

The switches in the example shown in Figure 1 are IGBTs. They have been a popular choice for traction converters because they are capable of handling high voltages, switch quickly, offer good performance, and are relatively inexpensive. However, as prices fell and the commercial availability of SiC MOSFETs increased, engineers began to turn to these components due to their significant advantages over IGBTs.

You can find the full article here: https://tek.info.pl

How to choose a proven EMS service provider? EMS is a contract supplier of electronics, the services of which are used by companies involved in the production of devices and machines. The EMS supplier creates electronic components on request that are necessary for ...
Read more High-copper metallized components and PCBs act as heat sinks: they create a heat dissipation effect that draws heat away from the soldering tip, making it difficult to deliver to the solder point.
Read more

What is the assembly of PoP elements? Package on Package (PoP) technology was born in the early 1990s. The era of hardware miniaturization began, which required better use of the available...
Read more DFT (Design for Testing) analysis is used in the process of designing and manufacturing electronics circuits. Some of integrated circuits are equipped with additional ...
Read more
This site uses cookies!