Fairphone 3 is a smartphone with a mission: the company focuses on fair trade conditions, long device life and ease of repair. See how such a smartphone is built.

Fairphone is a Dutch company that aims to produce smartphones with a reduced environmental impact. The company designs its devices with longevity, easy repairs and modular upgrades in mind, with the goal of keeping the equipment operating as long as possible. The company tries to use recycled materials in its constructions and reach directly to component manufacturers. Fairphone introduces some of its suppliers. Arima Communications is responsible for final assembly of the device, Baolong Electronics supplies the vibration motor and Gold Circuits Electronics produces PCBs.

Fairphone 3 is the latest model of the Dutch company. Its key specification is as follows:

The iFixit team took up the demolition of the Fairphone 3. As the company itself emphasizes, the smartphone is to be easily repaired and easy to use. Indeed, demolition is very simple according to iFixit: the rear lid simply folds away without any tools, and the removal of the battery is facilitated by a special cut-out in the housing.

Battery capacity is usually expressed in milliampere hours (mAh) or watt hours (Wh). The 3.85V Fairphone 3 battery lasts 11.781 Wh, which is slightly better than the Google Pixel 3a (11.55 Wh) and slightly worse than the iPhone Xs Max battery (12.08 Wh). The best in this regard is the 6m Shift battery of the smartphone, which can withstand 16.3 Wh. 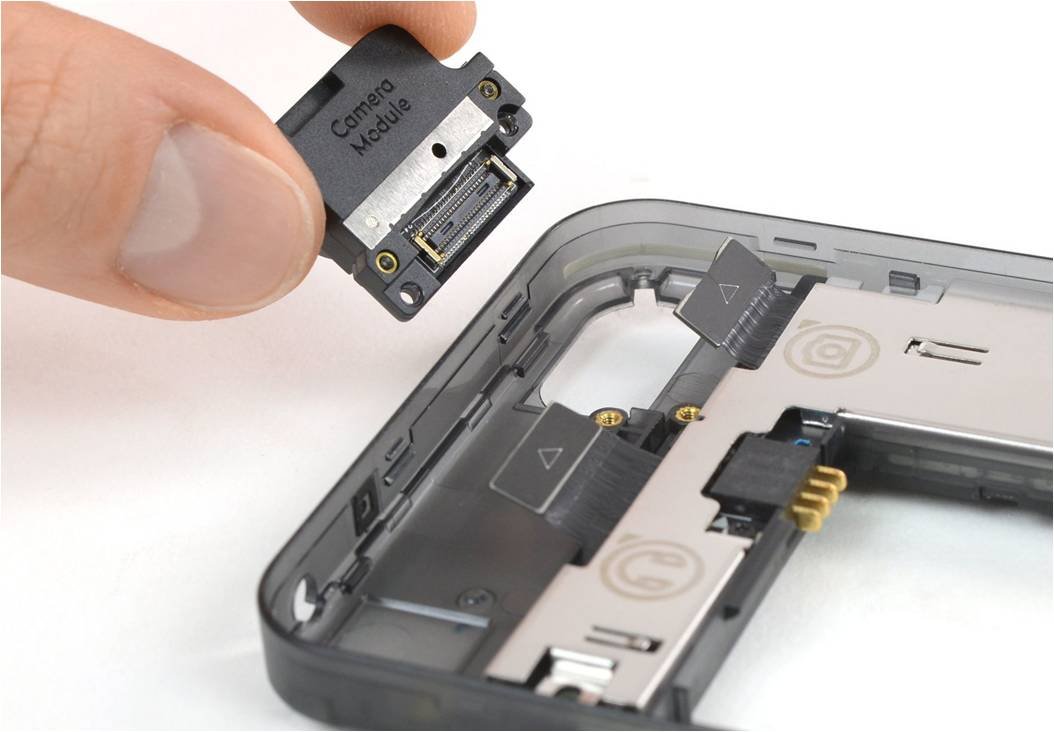 Compared to previous models, instead of the pogo-pins used previously, the individual modules of the device are connected with press-fit connectors, which are easily released after only a slight levering. The design of the entire device is modular - in the event of a failure, only a single module is replaced. Fairphone 3 has four modules: top and bottom modules, camera module and speaker module. Importantly: the body of the modules is made of 50% recycled polycarbonate.

The top module contains one of the cameras (the one for selfies, 8 MP), a headphone jack, distance and ambient light sensors. A separate 12MP camera module is based on the SONY IMX363 Exmor RS sensor, which also has a LED flash. The bottom module contains a vibration motor, a microphone and a permanently soldered USB-C connector, while the last module contains only the speaker itself.

In addition to the modules, there is, of course, the motherboard, connected with a fingerprint reader with spring contacts, volume and power buttons, and several antennas. The iFixit team found the following components on the motherboard:

In summary, it is worth adding that iFixit is a team with a mission that pays special attention to the ease of repair and maintenance of the device. Fairphone 3 received 10 points out of 10 for these features! Laboratory measurements made by Fraunhofer ISE confirmed that Saule Technologies perovskite photovoltaic cells are able to work with an efficiency of 25.5% in operating conditions typical for IoT applications.
Read more To get a guarantee that the created electronic system will work flawlessly, manufacturers carry out a series of tests...
Read more

One of the basic challenges related to electronics housings is heat dissipation, which is related to the heating of electrical, and thus mechanical elements inside the housings.
Read more
This site uses cookies!